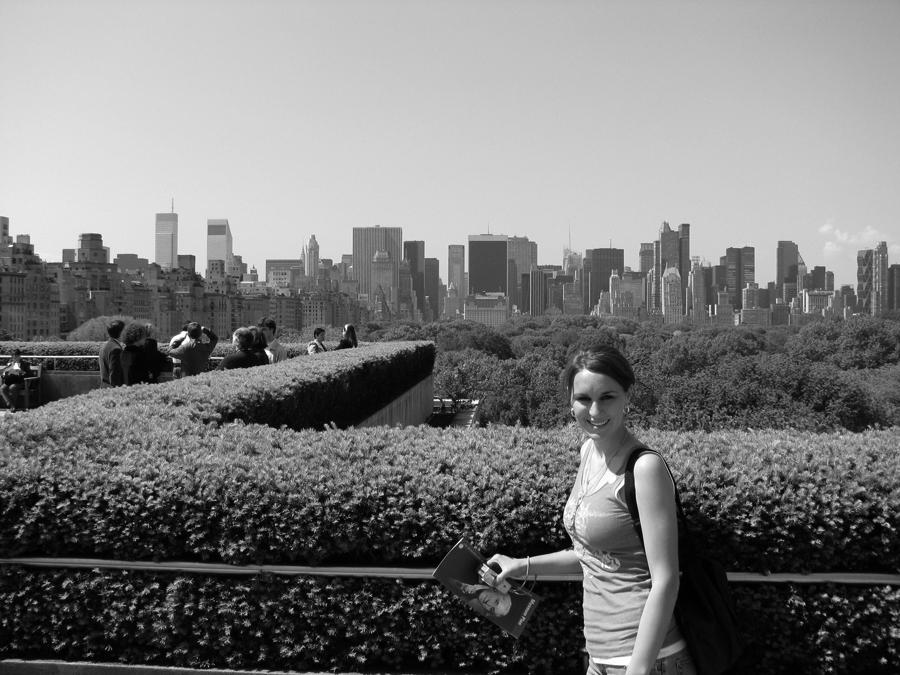 Payton Hamm enjoys the New York skyline from the rooftop gallery of the Metropolitan Museum of Art during last year's trip. It's not too late to be a part of the trip. USAO invites students, faculty, staff, alumni and local community members to join a team of travelers headed to New York May 19-24. More information is available from tour leaders Roger Drummond at (405) 361-2554 or Jacquelyn Knapp at (405) 361-2554.

The USAO trip to New York is always a thrilling adventure for participants. But an exciting season on Broadway, several new plays and many old favorites combine to make this trip extra special, says Roger Drummond, tour co-leader and an emeriti faculty in drama at USAO. The deadline for the initial deposit has also been extended.

Every spring, students and faculty at the University of Science and Arts travel to New York City for a week of fun, culture and memory making. The annual art and theatre tour is scheduled May 19-24. As always, the public is invited to join the USAO crew. The tour is led by Drummond and Jacquelyn Knapp, assistant professor of art.

“There is some exciting news about this year’s trip. Participants will enjoy one of the most exciting seasons on Broadway in many years, we have a new option for choosing shows and an extended registration deadline,” Drummond said.

A $300 deposit is due by Feb. 20 instead of the original deadline of Feb. 9, with the remaining balance due by March 23. All deposits become non-refundable after Feb. 20. Trip cancellation insurance is available.

New plays playing in New York this year include 9 to 5 starring Allison Janney with new songs by Dolly Parton; Accent on Youth with David Hyde Pierce; Impressionism with Joan Allen, Jeremy Irons and Marsha Mason; The American Plan with Mercedes Ruehl; The Philanthropist with Matthew Broderick; Exit the King with Susan Sarandon and Geoffrey Rush; Billy Elliot, and Shrek The Musical.

Revivals include Blithe Spirit with Angela Lansbury as Madame Arcati with Christine Ebersole and Rupert Everett; Waiting for Godot with Nathan Lane, Bill Irwin and John Goodman; West Side Story; Hair; Pal Joey; South Pacific, and August Wilson’s Joe Turner’s Come and Gone. More information about all Broadway and Off Broadway plays is available at www.playbill.com.

“We have added some options for air travel this year. Since many of our travelers live in Texas, in addition to the 25 seats we reserved from Oklahoma City to New York, we have reserved 15 seats direct from Dallas-Fort Worth to New York so that our Texas friends can join us in Dallas and arrive on the same flight as the rest of the group. The return flight will also be the same for both groups. For those who are flying from cities other than Oklahoma City or Dallas, we also offer a land only price – no airfare,” Drummond said. There is a $70 price reduction for those flying from Dallas and a $400 price reduction for the no airfare option.

Tour costs begin at $1,249 each for USAO students, four to a room. Non-student rates start at $1,349 each for rooms of four. Rooming for three is $1,649 each, two to a room is $1,749 each and single rates are $2,124. Prices are based on current airport fees and fuel surcharges; any significant increases will need to be added.

“With so many exciting performers and performances this year, it will be easy to pick the two Broadway shows included in the tour price as well as the three optional add-on plays.

“With such a great variety of shows available this year, I don’t want participants to miss out on that one special play or favorite star. As tour leader, I will still pick the two shows included in the tour and the three optional extras for the group, but if those choices do not include that special show participants really must see, then participants will be able to request a substitute for either of the two included shows,” Drummond said.

“As always, I will make every effort to get tickets for any other shows participants might want to see. And remember, there will be time to see a baseball game in the New Yankee Stadium during our trip this year as well.”

In addition to the drama portion of the trip, Knapp will lead the art package that consists of visits to the Museum of Modern Art, the Metropolitan Museum of Art and a gallery tour