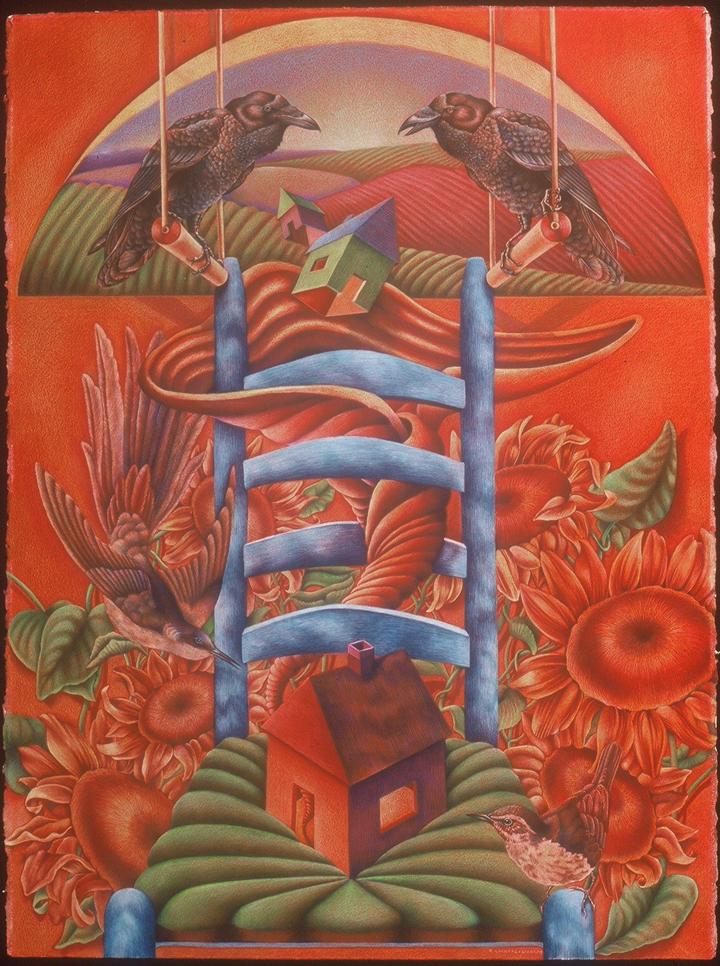 CHICKASHA – A dazzling display of art by state and national artists is coming to Chickasha when the “Oklahoma: Centerfold” exhibit reaches the University of Science and Arts on Jan. 14. The biennial juried art exhibit is hosted alternately by USAO and the Leslie Powell Gallery and Foundation of Lawton.

Displayed in the USAO Art Gallery through Feb. 9, “Centerfold” features more than 40 original pieces by 31 artists from across the nation. Fifteen artists represent different Oklahoma communities.

“One of the things that both USAO and the Leslie Powell Gallery do is give a venue for quality artists,” said Cecil Lee, Regents professor of art and director of the USAO Art Gallery. “There is a tremendous number of high quality artists who do not get public showings. The ‘Centerfold,’ which is nationwide, gives them that venue. It also helps make the public aware of artists in Oklahoma, the region and the nation.

“Visitors should understand that this is not a farmed out show from Lawton. This is a collaborative effort between USAO and the Leslie Powell Gallery, and we are pleased to bring such quality work to the University and the Chickasha community.”

Beginning at 4 p.m. on Jan. 14, the USAO Art Gallery will hold an opening reception for the art show, during which visitors can meet several of the artists.

“Those who are interested in the arts will have the opportunity to meet the artists and discuss their art,” Lee said. Refreshments will be provided.

Photographers, painters and artists of multiple media compete in the exhibit for cash prizes. Although the contest features primarily local flavor, it is open to artists from any state.

Lawton photographer Andrus Clark took first place in the contest for his black and white photo montage, “Prayer in REM Sleep.” The award included a $1,200 prize.

“Oklahoma: Centerfold” began in 1989 as an annual, local juried art show. The show’s title is derived from Oklahoma’s location on a U.S. map – directly on the centerfold.

But its location doesn’t drive away out-of-state competition. Now in its twelfth exhibition, the contest has received nationwide attention. Every other year, artists from throughout the United States give Oklahoma artists a run for their money.

The “Oklahoma: Centerfold” show is not the only juried art show run by USAO and the Leslie Powell Gallery. During the off-years, the two galleries coordinate the “Seven-State Biennial” art show, which features artists from Oklahoma and seven contiguous states. Together, they are two of the state’s largest juried art shows. The next show is scheduled for November, 2007.

Cecil Lee said he hopes local art enthusiasts and the curious will stop by for the “Centerfold” opening reception Jan. 14 at 4 p.m.

The USAO Art Gallery is located in the first floor of Davis Hall on the campus of USAO. Davis Hall is on the oval at south 17th Street between Grand Avenue and Alabama Street in Chickasha. Hours of operation are 8:30 a.m. to 4:30 p.m. Monday through Friday.

“Oklahoma: Centerfold” is free and open to the public. More information is available by phone at (405) 574-1239 or by email at clee@usao.edu. The USAO Art Gallery’s website is www.usao.edu/gallery.