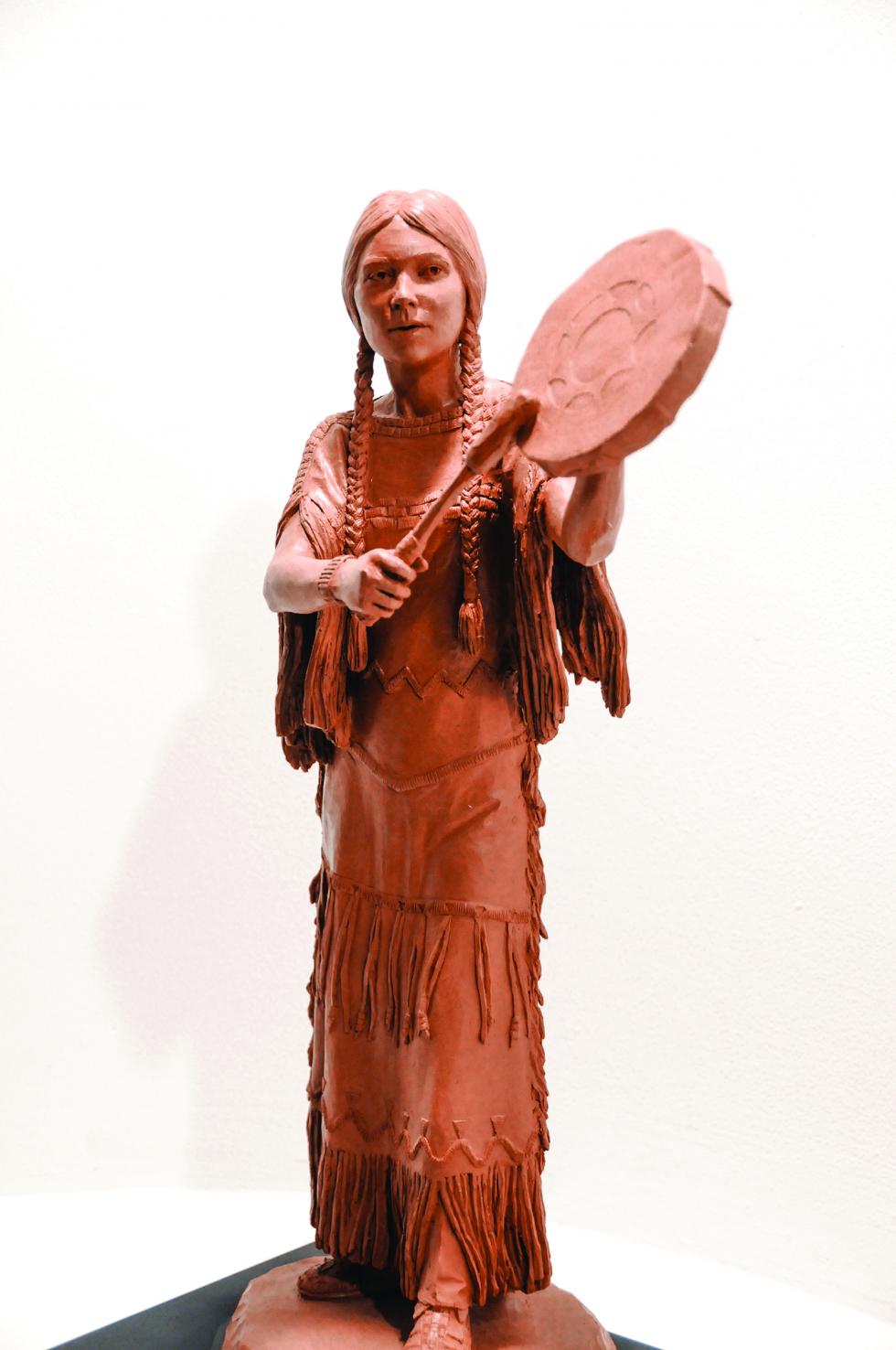 Sculptor Jon Hair presented this maquette of Te Ata Fisher as part of his winning bid to memorialize the celebrated storyteller in monumental form on the campus of the University of Science and Arts in Chickasha. Hair was chosen from a pool of more than 30 artists after an extensive nationwide search.

CHICKASHA -- With more than 75 sculptures gracing the campuses of 30 universities, Jon Hair is bringing his artistic mastery to Oklahoma to capture the likeness of “Oklahoma treasure” Te Ata Fisher in monumental bronze on the campus of the University of Science and Arts.

Hair is best known for his 35-foot bronze and steel sculpture, “Olympic Strength.” The sculpture of four athletes lifting a globe on their shoulders was commissioned by the United States Olympic Committee to adorn the grounds at the Olympic Training Center in Colorado Springs, Colo.

Other notable works include a 24-foot bronze sculpture of Captain Christopher Newport, one of the founders of the Jamestown settlement in 1607, and “The Boilermaker,” a 26-foot sculpture for Purdue University.

“Te Ata’s remarkable legacy in the arts demands an artist of impeccable reputation and peerless mastery to capture her essence,” said USAO President John Feaver. “And we are grateful to have found that in Jon Hair.”

The Te Ata Statue committee chose Hair from a final pool of five sculptors after each made a public presentation of his or her vision for the project.

Each artist’s model sculpture, or maquette, was placed on display so the public could offer comments on the presenting artists’ work.

Few Oklahomans have garnered as much attention around the world as Te Ata, recognized for a lifetime of achievement by governors, presidents, kings and her alma mater, the University of Science and Arts of Oklahoma.

Born Mary Thompson and raised in Tishomingo, Te Ata attended Indian schools until she enrolled at the Oklahoma College for Women, now USAO.

After graduation, she took her drama degree to New York and appeared on the New York stage.

But her unique persona was born when she left traditional theater and crafted a one-woman show to illustrate and teach American Indian culture. Dressed in buckskin costumes with authentic props and acting out various roles, the striking and elegant actress presented well researched and sensitively interpreted legends, songs and history of Indian tribes.

Te Ata was named as the first “Oklahoma Treasure” in September 1987 by Gov. Henry Bellmon. The award was created “in recognition of people resources, bestowed on individuals who have made extraordinary contributions to the state,” reported the State Arts Council, which developed the award.

The Te Ata statue project was set into motion by a generous gift from OCW alumna Nan Bilbrey Willett and her husband John. Willett, a graduate of the class of 1957, says that the gift was motivated by a dual love for the university and Te Ata herself.

“My mother graduated from there and I started attending various productions there when I was just four or five,” Willett says. “My mother knew Te Ata. The other alumna and I felt like if Te Ata was going to be memorialized, it needed to be on our campus.”

“It was our home and it was her home too.”

In August of 2012 President John Feaver commissioned a committee with representatives from statewide arts organizations, the Chickasaw Nation, the donors, and various university groups to select an artist and oversee the project.

The statue is to be located on the USAO campus, in an area south of the Alumni Chapel and north of Grand Avenue, making it prominently visible to campus residents and visitors alike.

The likeness will be cast in bronze, depicting her from head-to-toe with her arms raised in a storytelling pose. The statue is planned at monumental scale, which is traditionally one and a half times larger than life size.

Other members are: Shayna Pond, graphic designer with USAO’s Media and Community Relations department; Layne Thrift, assistant professor of art and director of the Nesbitt Art Gallery; as well as the Willetts.

The committee is chaired by Dr. Michael Nealeigh, vice-president for university advancement.